Coming soon to a gas station near you…

Pumps with stupid video advertisements that play when you pump gas.
One morning this week, I stopped in a gas station to fill my gas tank up.
Typically, your normal gas station pump has your little info screen that shows stuff like enter your pin, etc, or asking you if you want a receipt, basic things. Some have color screens but they aren’t that sophisticated.
So I come up to this pump: 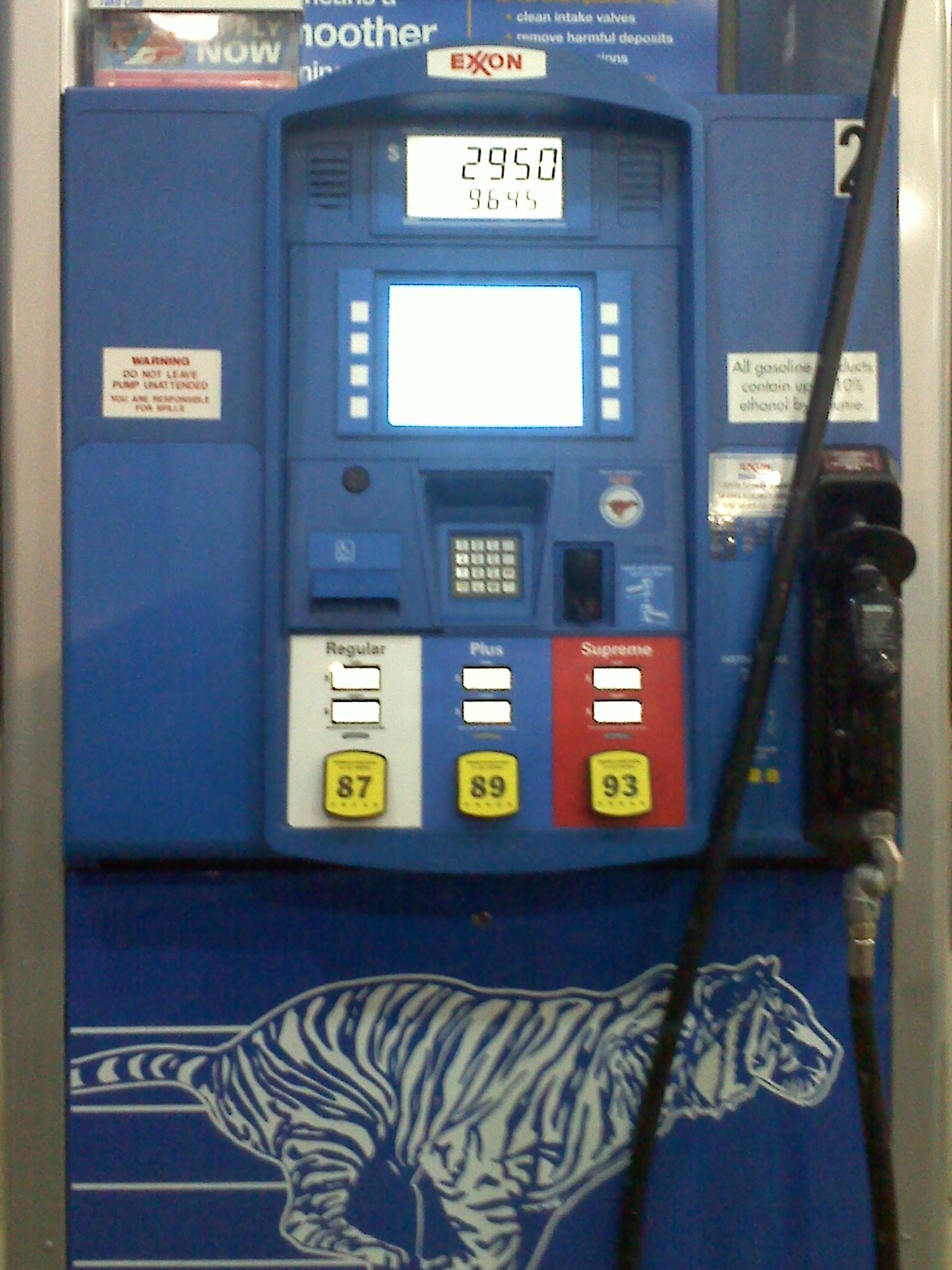 Yeah, looks like a normal gas pump, with a slightly larger screen, and those annoying messages saying “If you have a credit card or a debit card from OUR company, we will give you a *cash* discount on gas” and then the two prices on the pump saying if you are paying in cash or credit. Personally, I find that alone annoying. The lowest AKA *cash* price is displayed on the sign out front with a small small sign that says “cash” right next to it where no ordinary person would notice if they were driving down the street… That is until they pull up to the pump and start pumping gas, only to notice that the cost of gas jumped 10-15 cents when they started pumping gas since they used a credit card or a debit card marked as credit. I find that more as extortion, although they’re not violating any laws by doing that, and I kinda understand why they charge more. Credit card companies charge a 1-2% fee per transaction, but if you don’t want to piss off customers, at least put the highest price on the sign and surprise the guys who pay cash or use debit cards with the discount thing.
Oh and a lot of those, they have stickers like “debit cards are treated like cash” which is bunkus, as they designed the pump to fail automatically on the debit card option with a “please see cashier” message, or just still charge you for credit. That’s a large lie.
I wrote some SC state legislatures and some congressmen about that (and got FU replies back basically), as some gas stations I’ve seen in South Carolina charge as much as 0.25$ more per gallon for credit/debit card users than they do with cash, and they don’t even have any notice except for like a small 1 inch sticker saying its 25 cents more per gallon. That’s not even recouping a loss, that’s making a profit off of people who don’t carry excessive amounts of money in cash, like owners of gas guzzling tanks called SUVs that have to pay 50-80 dollars for a tank of gas.
Anyways, returning to the topic, that pump. So when I first started pumping gas, I didn’t notice the sticker saying I was being charged 15 cents more per gallon using my debit card as a credit card, so I quickly smashed cancel and put the handle back on the pump to abort that transaction and start back over with debit. When I did that, the screen displayed a picture ad about buying monster energy drinks. I looked at that and thought “Um, Okay, so they changed from signs to pictures on the screen, that’s not that bad.
Starting the pump again, the pump started to play a movie. Some movie ad for a movie that I’ll never see anyways (Not paying 12$ to 21$ for a movie ticket). That was a 1 minute ad that had fairly loud volume, this being at around 5 in the morning was a bit of a wakeup for me. Next, they played some ad for that one kid who sounds like a chick that little girls obsess about him singing about, I can’t remember his name off the top of my head. Regardless, the music was super annoying and I grabbed the ear plugs off my safety helmet from work and put them on for the rest of my gas pumping. As I’m putting the handle back on the pump, they played some video ad about some American idol clone show that I never watch either then another monster ad.
On purpose, I decided I’d drink a can of pop later instead of a monster just to be a dick.
Also, on a side note, when I returned to this gas station to take a picture of the pumps, I got some gas and got greeted by a super annoying pop star’s album ad. A nearby trucker who was checking his tires for some reason started screaming “[CS]damn! What is that god-awful noise?! It sounds like a girl taking a dump while eating peppers!” (I found that comment quite comical..)

Why that is annoying:
You can’t avoid the ad. You’re basically staring at the pump to see how much gas you’re putting in your car. For a car like mine, a cobalt, I put on average 7-10 gallons of gas into it every 3 days due to my summer job. For those morons who decided to buy a SUV for their one kid and the trips 3 miles one way a day, they put on average 15-20 gallons in, so they’re stuck staring at that crap longer than I was. I’m more inclined to think that they’d even buy the items that were advertised.

Why am I posting this?
If anyone has paid attention lately, advertisements are getting more and more forceful on the consumer. Heck, even tracking cookies (basically unheard of 6 years ago) are annoying. On my work computer, I was researching stuff for a project we were working on, and my ads on Pandora all the sudden changed to try and provide me safety equipment. Unfortunately, I’m stuck using IE 7 at work with default cookie settings, so it was either no Pandora or clear my cookies on each use. I decided to do both.
Off topic:Any company that decides it’s only going to make money off of getting into people’s personal lives needs to fail. Also this “lets make a lot of money in the short term and to hell with 10-20 years down the line” attitude is sickening. But that might be another post, perhaps, if I ever finish my draft post on the metric system.

Breast cancer, why is it the only hyped cancer?

Ever notice that everything donates money for breast cancer research?
How come no other cancer research is represented? You never see “wear blue for testicular cancer research” or “wear purple for brain cancer research”. That doesn’t seem quite fair, does it? Now I know someone who had breast cancer. She survived, apparently the survival chances are fairly high. I also knew someone with brain cancer. He died in a matter of months, chances of survival are nil apparently.
My main concern is all these breast cancer funding organizations, how much actually donate what they get to the scientists actually doing the research? I recall one foundation only was donating 1% to the scientists actually doing the research and the foundation taking the donations was raking in hundreds of millions of dollars.  For a nonprofit, they were sure making quite a profit eh?
Also, if one makes a remark about why others don’t get the attention breast cancer gets, they get labeled a “Woman hater”. That’s not being a woman hater, that’s being fair.
Oh, and when chicks on facebook were doing that bra color thing, I got the same remark made at me. I said “telling the world what bra you’re wearing does jack shit for cancer research. If you want to do something, fund the universities doing research on it.” Right off the bat, I recived a death threat and a ton of insults labeling me things like “woman abuser”, others suggesting I need to get castrated, etc. It was like making that comment was the most offensive thing on Earth. It wasn’t. I was being objective.

Bottom line: Focus on cancer research on ALL cancers, not just one.

Short rant today about something really simple.
License plate frames.
Okay, so not many people usually leave their home state but, why must people purchase the oversized frames that hide what state they are from?
Example, earlier this morning, I had a car fly by me at least going 20-30 mph over the speed limit. Out of curiousity, I looked at the plate. It wasn’t one of those standard South Carolina plates but another plate. The name of the state was covered on the plate with one of those frames that had a caption, something about them or a dealership being #1 of something.
First thing I said after seeing that is
“Where the hell are you from?!”
I wonder if police officers actually pull people over for that. I got pulled over ironically earlier today because some police officer’s plate reader could not read the letters off my plate. Now that’s stupid.